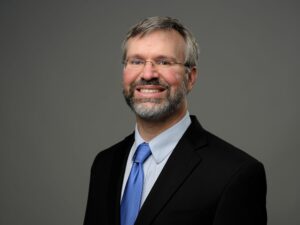 FUQUAY-VARINA, North Carolina (August 5, 2021) – Fidelity Bank is pleased to announce Jason York has joined Trust Company of North Carolina as a Senior Vice President and Wealth Management Development Officer. In his new position, Mr. York is responsible for developing customized and comprehensive financial plans for clients and their families, as well as, manage existing relationships throughout the Bank’s footprint. His office is located at the Trust Company of North Carolina headquarters in Cary on 100 West Chatham Street.

Jason has nineteen years of financial experience, with sixteen in the Triangle. Prior to joining Trust Company of North Carolina, he worked for BB&T as a Senior Vice President and Wealth Advisor. He also held commercial and business banking positions at BB&T. In addition to his financial background, Jason is active in the community. He is currently on the Salvation Army of Wake County Advisory Board. He also served on the Sacred Heart Cathedral Finance Council and Board of Directors for Friends of the NC Museum of Natural Sciences.

Mr. York graduated with honors from the University of North Carolina at Chapel Hill with a Bachelor of Arts in Economics. He also received his Master of Business Administration from William and Mary. Jason served in the U.S. Air Force as a Contracting Officer and was honorably discharged at the rank of Captain.  He currently resides in Cary with his wife, Marjorie, and has two children.

Fidelity Bank is a full-service financial institution with assets of approximately $3.2 billion headquartered in Fuquay-Varina, North Carolina. The Bank owns and operates 56 branches throughout North Carolina and Virginia; and was awarded a 5-star (superior) rating by BauerFinancial.